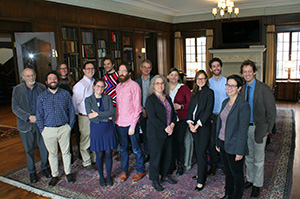 The German-Jewish Hermeneutics Workshop brought together more than a dozen scholars from around the United States and Germany to Northwestern to share research on the interaction of Jewish and Christian artists, theologians, and philosophers in the 19th and 20th centuries.

Papers addressed topics as varied as the influence of Christian biblical scholars on the work of Jewish biblical scholars and vice versa; philosopher Hans Jonas’ notion of “reading” the world; and the use of parable (mashal) as a literary form in sources ranging from the Talmud to the notebooks of Franz Kafka. Hosted by Claire Sufrin and Nitzan Lebovic (Lehigh University), the meeting was sponsored by the Crown Family Center for Jewish and Israel Studies with additional support from the German Academic Exchange Service (DAAD), the Berman Center for Jewish Studies at Lehigh University, and the Weinberg College of Arts and Sciences and the Chabraja Center for Historical Studies at Northwestern. Other Northwestern participants included German professors Jan Behrs, Peter Fenves, and Anna Parkinson and graduate student Ariel Weiner; and Hebrew instructor Hanna Seltzer.