Between Jesus and Paul: From Apologetics to Jewish Theological Affirmations in 20th Century Germany 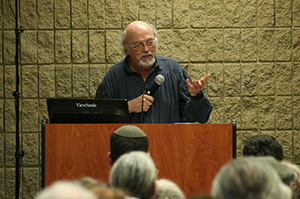 This year’s Manfred H. Vogel Memorial Lecture in Judaic Studies, held in conjunction with the German-Jewish Hermeneutics Workshop, featured the historian Paul Mendes-Flohr, whose work on German Jewish intellectuals including Martin Buber and Franz Rosenzweig has made an indelible mark on the study of the modern Jewish history. In his talk, “Between Jesus and Paul: from Apologetics to Jewish Theological Affirmations in 20th Century Germany,” Professor Mendes-Flohr addressed the fascination of many German-Jewish intellectuals with the key figures of Christianity, Jesus and Paul. Animated by captivating details such as Jacob Taubes’ claim that Paul was so deeply rooted in Judaism that he “spoke Yiddish,” the talk illustrated how German Jews explored the meaning of Judaism by examining the central heroes of early Christianity. The talk was also attentive to what was happening at that time in the work of Christian theologians such as Adolf von Harnack, whose Essence of Christianity portrayed Judaism in a negative light and elicited harsh responses from, among others, Leo Baeck and Franz Rosenzweig.