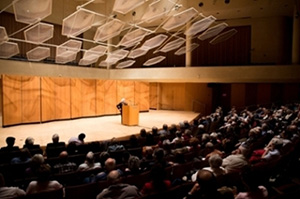 Israel as a Jewish and Democratic State

In this thoughtful talk, Professor Ruth Gavison, Haim H. Cohn Professor Emerita of Human Rights in the Faculty of Law of the Hebrew University, suggested that the State of Israel's Jewish and democratic identities together with its commitments to human rights should be understood as existing within a relationship of mutual reinforcement and creative tensions. She argued that all democracies are strengthened by allowing and even encouraging citizens to turn to the traditions of their different cultural groups as a source of meaning and values. It is because the majority of citizens in Israel are Jewish that Jewish values are amplified in the political process. At the same time, like other states, the State of Israel will not function without a commitment to take good care of all citizens, both Jews and non-Jews. Recognizing that Israel does not always live up to these ideals, Gavison made a forceful case for understanding the state's identity in light of political and legal philosophy and historical realities.

“Israel as a Jewish and Democratic State”
Ruth Gavison