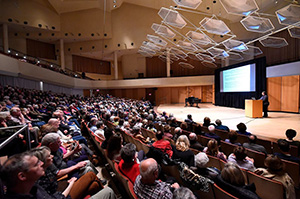 An audience of nearly 500 people was enthralled on May 7 by "Last Yiddish Heroes: Lost and Found Songs of Soviet Jews During World War II," this year's Klutznick Lecture in Jewish Civilization co-sponsored by JUF Chicago. In this presentation, the duo of Professor Anna Shternshis (University of Toronto) and singer-musician Psoy Korolenko brought Soviet Jewish life of the 1940s to life through the analysis and performance of Yiddish songs written during the Second World War and documenting the loss of Jewish life and the ongoing hope for the defeat of the Nazis with sadness, humor, and satire. Shternshis' discussion and Korolenko's dynamic singing together created a rich understanding of Jewish life in the Soviet Union for all present.