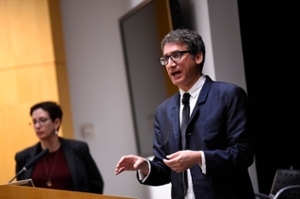 The Jewish Encounter with American Freedom: A New Variation on an Old Theme

Tony Michels, George L. Mosse Professor of American Jewish History at the University of Wisconsin-Madison, addressed the overwhelming tendency among historians of American Jews to assume that the United States is the exception to every other place Jews have lived over the length of their history. That is, historians have generally argued that because American Jews enjoyed equal rights by law from the beginning and because there have been no major political or legislative anti-Semitic movements, America has provided Jews with the freedom to flourish in a way they never have had before. In his talk, Michels argued persuasively that this paradigm must be reexamined against a broad panorama of Jewish history that includes both a variety of states (democratic and otherwise) and a variety of time frames. In the second half of his talk, Michels discussed the 20th century American Jewish literary critic Harold Rosenberg's definition of freedom. Rosenberg demanded that Jews be free not to be connected with the Jewish community; Michels considered how this definition of freedom might also challenge paradigms of American Jewish history.