The Renegade Jew Who Gave Us Modernity

Philosopher Rebecca Newberger Goldstein discussed her book, Betraying Spinoza: The Renegade Jew Who Gave Us Modernity. Rebecca Goldstein articulated an understanding of Spinoza's philosophy while providing a critique of his ideas.

Goldstein is the recipient of numerous awards for both her scholarship and fiction, including a MacArthur fellowship. She was named Humanist of the Year by the American Humanist Association in 2011, and, in 2015, was awarded the National Humanities Medal by President Obama in a ceremony at the White House. She is currently a Visiting Professor of Philosophy and English at NYU, as well as a Visiting Professor of Philosophy at the New College of the Humanities, London, UK. 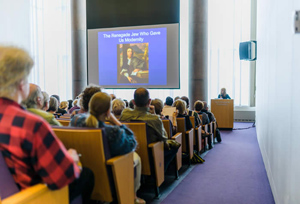