Joan and Sarepta Harrison Professor of Literature, Department of German and Program in Comparative Literary Studies 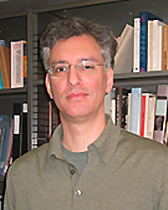 Peter Fenves is the author of A Peculiar Fate: Metaphysics and World-History in Kant (1991), “Chatter”: Language and History in Kierkegaard (1993), Arresting Language: From Leibniz to Benjamin (2001), Late Kant: Towards Another Law of the Earth (2003), The Messianic Reduction:  Walter Benjamin and the Shape of Time (2011), and Walter Benjamin entre los filósofos (2017).  He is the editor of Raising the Tone of Philosophy: Late Essays by Kant, Transformative Critique by Derrida (1993), the co-editor of “The Spirit of Poesy”: Essays on Jewish and German Literature and Philosophy in Honor of Géza von Molnár (2000) and Points of Departure: Samuel Weber between Reading and Spectrality (2016).  He re-issued and added an extensive introduction to Max Brod’s important novel from the early twentieth century, Tycho Brahe’s Way to God (2006), in which Kafka and Einstein are fused in the figure of Johannes Kepler. Two volumes he is co-editing are scheduled to appear in the coming years:  Werner Hamacher, Two Studies of Friedrich Hölderlin and Walter Benjamin, Toward the Critique of Violence.  The latter volume will include a new translation of Benjamin’s famous essay along with fragments he wrote during the late 1910s and early 1920s as well as translations of the writers and philosophers to whom Benjamin refers, including Erich Unger and Hermann Cohen.  His forthcoming book, which is an expanded version of the aforementioned Spanish-language monograph, is entitled Walter Benjamin among Philosophers: On the Way to Messianic Nature.